The International Alliance for Mountain Film is over twenty years old. Many years have passed since it was founded in the Hall of Emblems at the Mountain Museum in Turin, Italy. Unfortunately the pandemic canceled the Turin assembly scheduled for May 4, 2020, where we planned to celebrate our twenty years of activity, but it left us the possibility of publishing a book to go back over this first period.

Thus, came A history of passion. 2000-2020, the history of the association told by the three directors of three respective festivals – Toni Cembran, Mireille Chiocca, Joan Salarich – who have succeeded until 2018 as presidents of the Alliance. Its coordinator – Aldo Audisio – was immediately considered to contribute, not because he was behind a festival, but a museum with a very rich historical film and video library. Many other protagonists of this fascinating adventure have also given their precious contributions. 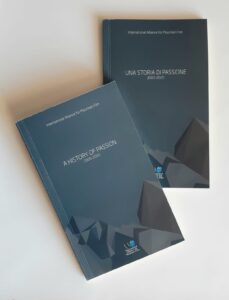 The text was written by the Italian journalist Sandra Tafner, Gabriela Kühn from the Zakopane “Moc Gór Festiwal Filmów Górskich” did the English translation, with the editing of Bernadette McDonald, honorary member as a founder of the Alliance in 2000. Aldo Audisio did the editorial coordination.

“We could have written a history based on documents, re-read the minutes and correspondence,” says Audisio, “instead we have relied on our memory and recollections to keep the spirit of emotions alive”.

The book was printed for distribution among the International Alliance for Mountain Film members and is now also available for online public consultation, in English and Italian, on the website mountainfilmalliance.org, History section.