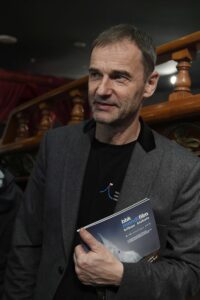 Polish mountaineer and filmmaker DARIUSZ ZALUSKI has been awarded with the International Alliance for Mountain Film Grand Prize 2021. It was announced at the awards ceremony of the Trento Film Festival by Javier Baraiazarra the president of the Alliance: “Zaluski is the director and mountaineer who has best known how to make the lesson of the great Kurt Diemberger his own, establishing as the new director of the 8000ers”.
The IAMF Grand Prize, which celebrates its 20th anniversary, recognizes the trajectory of the award-winning filmmakers, as well as their contribution to both cinema and mountain culture. Zaluski becomes part of a select group of filmmakers who mark the history of mountain cinema in the 21st century.
NEWSLETTER

This site uses cookies. By continuing to browse the site, you are agreeing to our use of cookies. Find out more.